Kids' Choice Awards 2008 Promo Jack Is Back
2008 commercial featuring Black singing a cover of the AC/DC song, "Back in Black"

Black and Bloom getting slimed 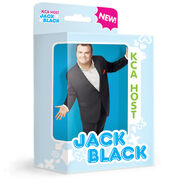 Add a photo to this gallery

Retrieved from "https://kids-choice-awards.fandom.com/wiki/Jack_Black?oldid=799"
Community content is available under CC-BY-SA unless otherwise noted.